First, apologies for the delayed blog. It's been a hectic week! I had a job interview on Tuesday (who knows how it went?) and then suffered a series of computer viruses. I have never encountered more viruses in my life (cold symptoms included) than after our company "upgraded" our virus protection software. The internet is dangerous! (really, I think we have a internal issue, but...)

While the economy has many folks dining in more as a means to save money, I've often loved dining in (and, to be honest, I've spent a good bit on obscure ingredients, I may as well have eaten out). However, I came to the realization that I've not cooked for Mr. SA all that often. Yes, weeknight dinners, but not the pull out the china and silver, we're dining by candlelight. Years back in my dating life- I'd cook very elaborate formal dinners for the guy at the time. Yet poor Mr. Right has only had a handful of my go-to whoop-de-doo meals. The latest Saveur magazine featured a divine-looking caramel tarte and poof- I was inspired. 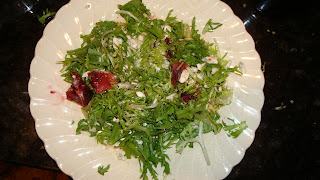 
Served this with a white wine from Ledson Vineyards (beautiful home/castle!). 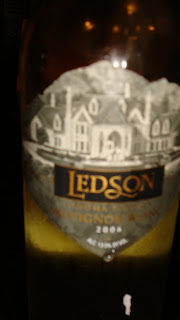 For the entree, I made gnocchi, one of my husband's favorites! It was a time-intensive process, but pretty easy. The recipe also featured mushrooms, another of hubby's faves, and truffle oil, which I adore. Again, recipe from Saveur from Boston's Sportello restaurant. 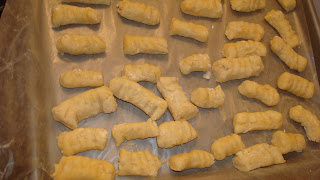 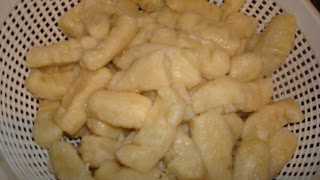 Gently knead dough until it just comes together, adding a little more flour if it begins to stick. (I added a lot more flour! A little bit for each roll.)
2. Lightly flour a parchment paper–lined baking sheet and set aside. Using a rolling pin, roll dough to a 1⁄2" thickness. Cut into 1⁄2"-wide strips. Roll each strip between your hands and the work surface to form ropes. Cut each rope into 1" segments. Working with one segment at a time, roll it down the back of a small fork so that the tines make ridges on the surface of the dough. Transfer gnocchi to the prepared baking sheet; cover with a kitchen towel and refrigerate until ready to cook. 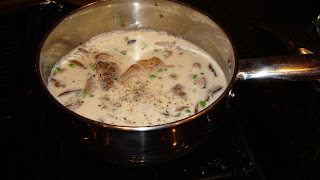 3. Make the sauce: Bring a 6-qt. pot of salted water to a boil. Heat oil in a 12" skillet over medium-high heat. Add mushrooms to skillet and cook, stirring occasionally, until light brown, about 5 minutes. Raise heat to high; add cream, peas, and thyme and cook, stirring occasionally, until cream reduces by half. Season mushroom sauce with salt and pepper and remove skillet from heat. Boil gnocchi in the salted water until they float, about 2 minutes. Using a slotted spoon, transfer gnocchi to mushroom sauce, add chives, and toss to combine. 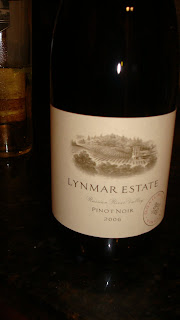 We had an unbelievably fabulous Pinot Noir from Lynmar Estate.
Oh, yes, I did serve vegetables- asparagus- but it wasn't nearly as exciting.

The piece de resistance- Chocolate Caramel Tarte, also from Saveur and from Brooklyn's Marlow and Sons restaurant. Pardon my poor pictures- they do not do this dessert justice. 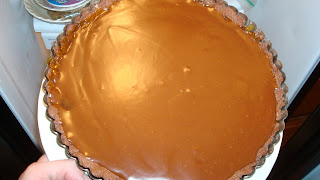 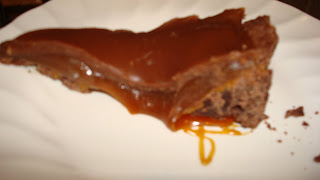 Mix in dry ingredients. Transfer dough to a 9" fluted tart pan with a removable bottom and press dough evenly into bottom and sides of pan. Refrigerate for 30 minutes. Prick the tart shell all over with a fork and bake until cooked through, about 20 minutes. Transfer to a rack and let cool.
2. Make the caramel: In a 1-qt. saucepan, whisk together sugar, corn syrup, salt, and 6 tbsp. water and bring to a boil. Cook, without stirring, until a candy thermometer inserted into the syrup reads 365°. Remove pan from heat and whisk in butter, cream, and crème fraîche (the mixture will bubble up) until smooth. Pour caramel into cooled tart shell and let cool slightly; refrigerate until firm, 4–5 hours.
3. Make the ganache: Bring cream to a boil in a 1-qt. saucepan over medium heat. Put chocolate into a medium bowl and pour in hot cream; let sit for 1 minute, then stir slowly with a rubber spatula until smooth. Pour ganache evenly over tart and refrigerate until set, 4–5 hours. Sprinkle tart with sea salt, slice, and serve chilled.


Posted by Southern Aspirations at 5:37 PM