DWR In the Chair: A Night with John Gidding and Brian Patrick Flynn 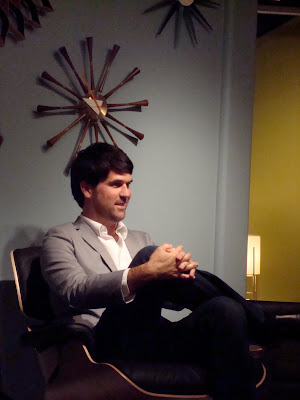 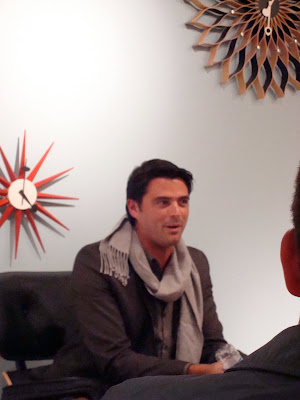 Friday evening I had the pleasure of attending Design Within Reach's "In the Chair" series, which features panel interviews with designers. This session, "Design on TV" introduced the group to Brian Patrick Flynn, of "Movie and a Makeover" on TBS and John Gidding, host of "Designed to Sell" on HGTV.
I freely admit I felt as if I were way out of my element. Many of the attendees seemed to know each other and surprise(!) were in the design field. I kept an eye out for any recognizable fellow Atlanta bloggers but didn't spy any. All in all, I really enjoyed the panel discussion. And found I was more up-to-speed on design media (magazines- and the demise of many of them, blogs, Lonny) than many of the attendees and the moderator. Brian Patrick Flynn and I shared a moment of mutual love for Lonny, which totally endeared him to me.
We learned about their take on interior design and captured a few key phrases. My favorites- "Design is something you live and breathe." (John Gidding) and "My style is 'handsome glamour.'" (Brian Patrick Flynn) Also, while y'all likely knew this- both talked about the differences of designing on TV. For example, one can't use tiny prints because the camera cannot interpret it correctly. Certain flowers are "off limits" either because of the color (pale purple and pink don't read well on camera) or because of the petal size (camera cannot differentiate well the little petals).
Thus, in an effort to show you some of their "real" work, I set about scouring the Internet. Both gentlemen's websites show "under construction" so it was a bit more challenging than I had anticipated. Also, I admit I got a little click-crazy and did not attribute many of the following photographs. I apologize! If you have information, please let me know and I will fix.
First up, John Gidding. Here's the dressing room he designed for Carrie Fisher for her Wishful Drinking set. Not my favorite (but what do I know about dressing rooms?) but I love the Ghost chairs and the rug. 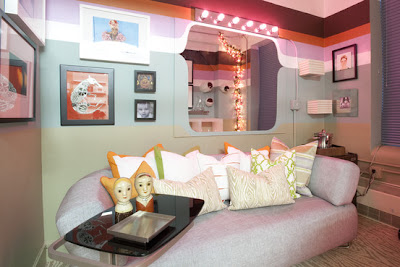 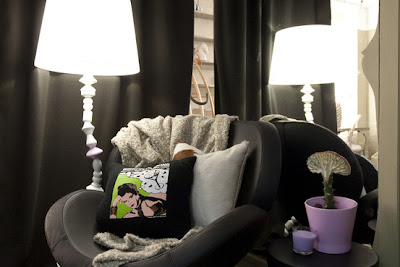 John has been identified as an "Ikea Hacker" and apparently has largely Ikea furniture in his Atlanta home. In fact, many of the Ikea employees at Atlantic Station recognize him on site.
Below, a bookcase he designed for one of the shows taking 2 Ikea bookcases and completely redoing them. (here is where his architecture background shows). 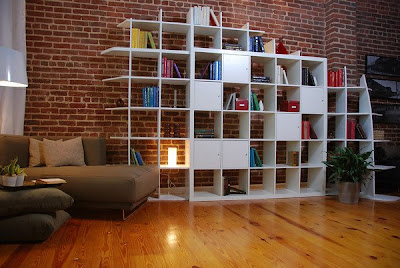 For all his work on HGTV, I really expected to see more rooms. Here's the one that pops up most often- his work on the study for the 2009 HGTV Dream Home.

This next room is undoubtedly my favorite image I found- the Artefacto Style House, Atlanta Homes. I love the gray with the pops of orange.

via Atlanta Homes Magazine
And, we'll end on John's modern take of the Christmas Tree.

Next up, Brian Patrick Flynn, who is a self-taught designer. You can really see how "Handsome Glamour" applies and see bits of his design idols- David Hicks and Dorothy Draper.

I believe that this is his living room. Lots of neutral- but with gray and purple accents.

I love the combination of the gray and brown, nailhead trim, and pops of orange.

Modern kitchen and dining space in a Loft.

I adore the Tiffany Blue with black and white, shown here.

Photographer Sarah Dario via Seattle Times
I believe during his Green phase? I love the green and the white (shocker).

via Daylife
Outdoor loft space in Atlanta... what a view!

Sarah Dario photographer
A set (I think) he did illustrating living with pets. Brian recommends tough fabrics, like Sunbrella, when living with dogs and cats- to withstand the wear and tear. This room still looks glamourous!

via Tampa Day
And we'll end with Brian's take on the Christmas tree.

via Daylife
Hope you enjoyed!
-Emmie
Posted by Southern Aspirations at 8:11 AM