Ideally, the holiday season fills you with lots of joy. Key words and phrases come to mind (other than joy) like: Wish, Give, Happy, Merry. Unfortunately, some other words also pop up- like stress, frustration, impatience... So take a little "me" time- time for your self to reflect, meditate, or mindless relaxation.

First, the before (decorated by the previous homeowner). You can't really see it because of the poor picture quality, but there is busy beige wallpaper. It was OK, but beginning to peel in some spots in the bath and I wanted something a little more glamorous. 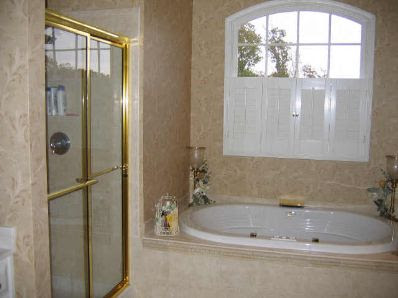 So on one of my sister's family visits, we had my brother-in-law get to work on recreating the bath. He painted stripes in a creamy white and almost yellowish offwhite. It was amazing to see how much larger the bathroom appeared! (and we did pay him!) 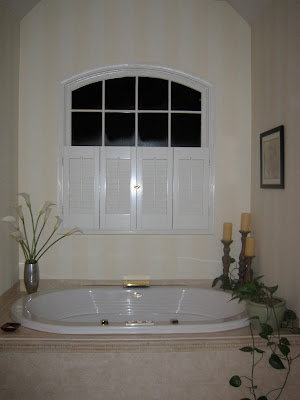 Dogs don't really understand the styling and staging of pictures. Or maybe they do. Here's Kaylee, who wants in on the action (and admittedly was attracted to the scent of the scrub as well). 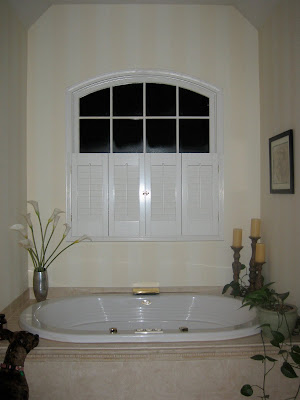 For bathroom phase two, I want to replace the brass-looking fixtures with nickel- but the faucet and knobs are like $450! And replace the sliding shower door with a glass wall. However, that falls near the bottom of the to-do list, so for now, I will just relish and appreciate the large Jacuzzi tub.

OK, so off for spa inspiration. Most of these spas I have not visited- but this first treat I have!

This is the Grand Wailea spa in Maui where we were fortunate to have honeymooned. Love this grand entryway! While most of us will not have a two-story bath, I love the soothing colors used, sconces, and architectural details like the columns. I also have never been a "gold" girl but love the gold accents used here. Given the "yellow" hue, gold just works so much better than any other option.

This next spa is much more "zen" and minimalist in design. But similar color scheme, which invokes a serene feeling (I cannot say the word serene without thinking of Seinfeld and George's(?) Dad saying, "Serenity Now!"). Anyway, an easier look to achieve in one's own bath- dark brown and gold artwork, dark wood, and piles of candlelight.

Another creamy gold palette but with bright pops of green through the plants and red through the tile. Calming- but not put-you-to-sleep.


Lighting is also key. I adore the crystal fixture here- and the sconces on the walls. Clearly would need a smaller version, but that would totally glam up the bathroom. Fabulous mosaic tile design on the floors too.

Miami Beach Resort and Spa
Speaking of lighting, I adore this fixture below. I hope you can see the details- it is hundreds of wine glass pulled together to make a chandelier.

Use the lights to add a huge pop of color. (I couldn't write about spas and not mention the Viceroy). 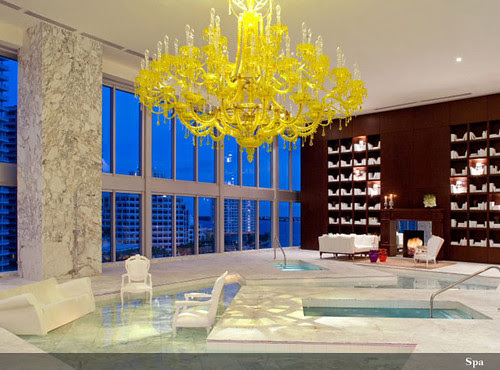 Viceroy Spa, Miami
If these options are too frou-frou, perhaps this is your speed. Great functional space, lots of cubes, straight lines, and I love the natural material and texture of the rock (lava rock?) down the center of the room. 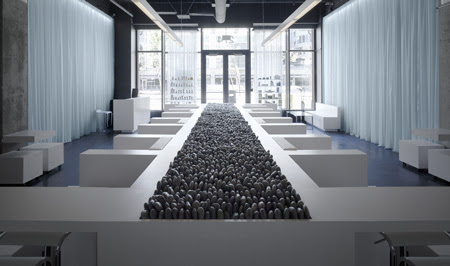 Mizu Spa, San Francisco CA
This next space is made a little less "austere" with the flowy drapes and shag rug. But I wouldn't say frou-frou. And, it is green!

This next space is pretty simple as well- and love the blue and turquoise hues. You'd guess the location is Greece before knowing it, too!

A modern take on the blue and white theme. Lots of shiny surfaces. 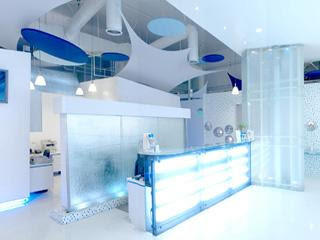 Blue MedSpa Atlanta
More blue through the draperies. One of my favorites- it has everything- cool stone surfaces, a great chandelier, candles.. 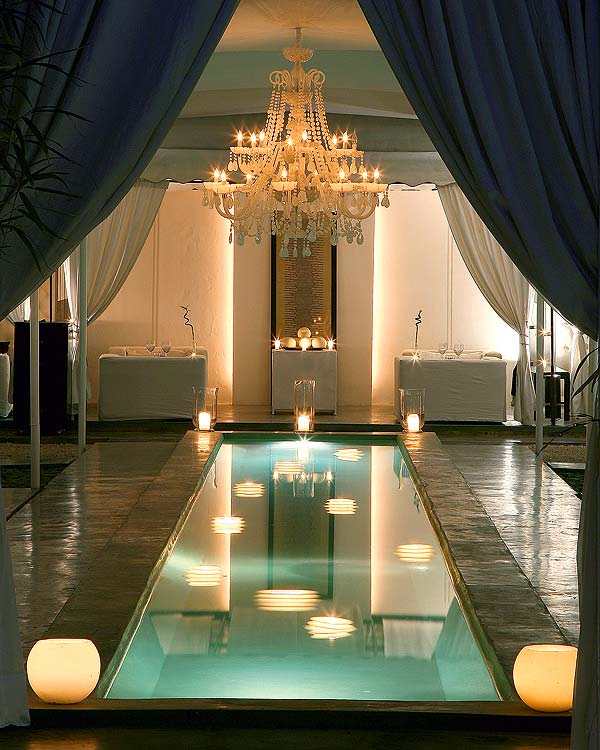 Le Palais rhoul via Belle Vivir
More texture-- look at that chair! Love it! And for the "all white" crowd in the blogosphere, this should be perfect for you.

If you need the bath to invigorate, you could always do red. A bright example here. 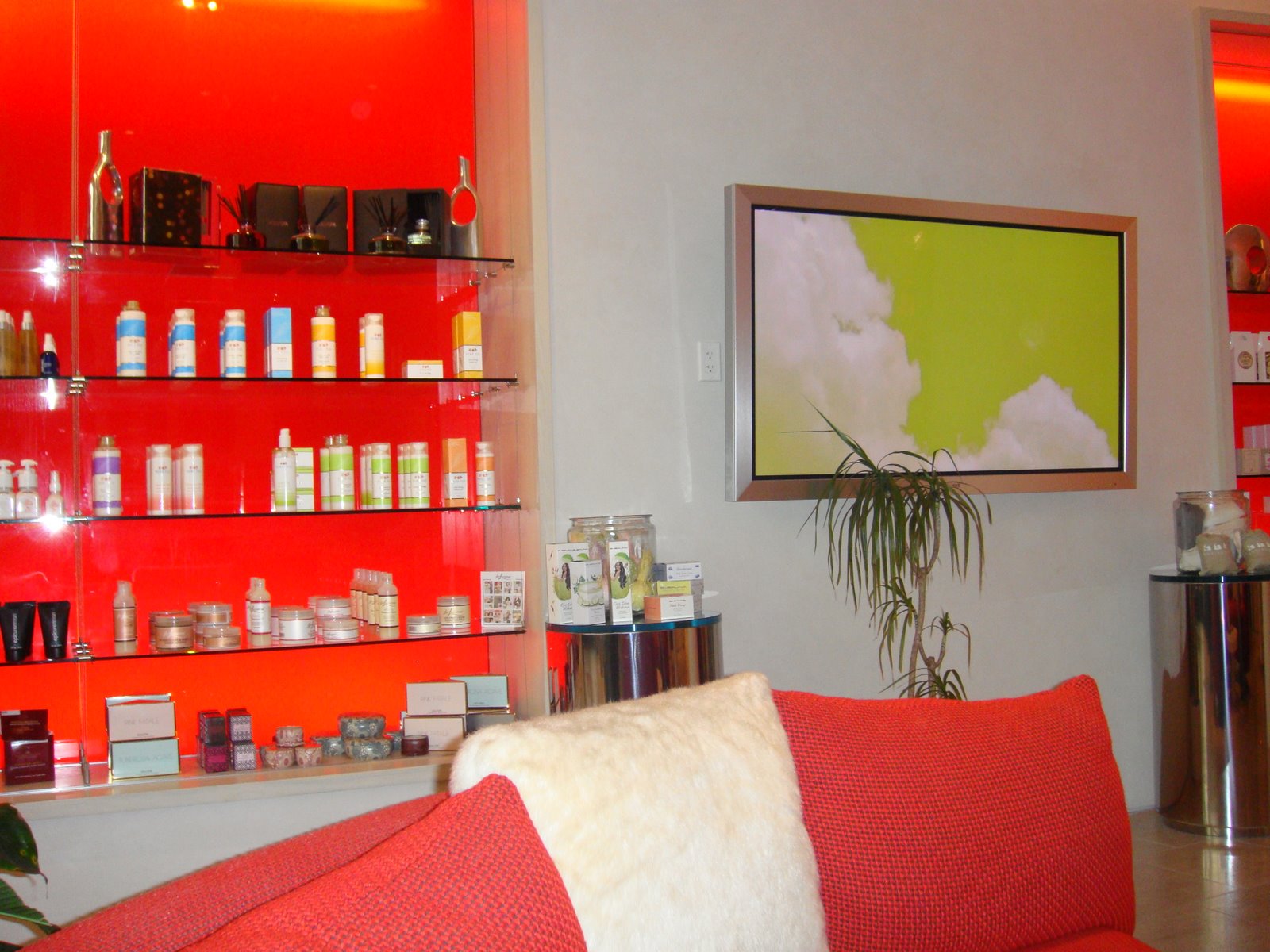 The Spa at Red Rock via Sealaura

Here, the red has a deep warming effect, rather than jolting you awake. 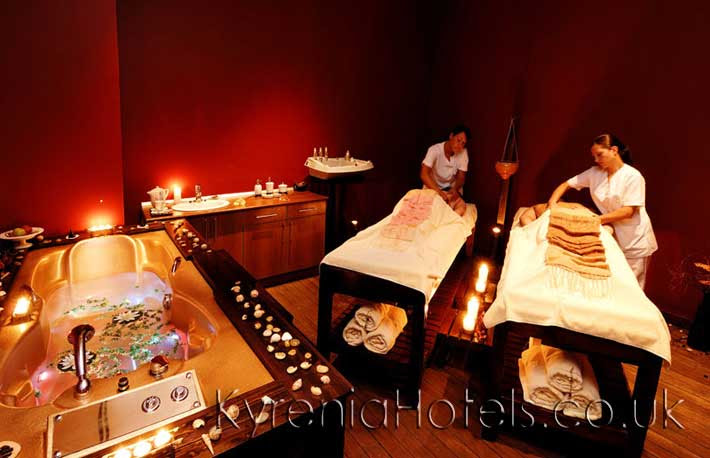 I have to end with one of my faves, though--- creamy yellows and golds. Here's the very opulent spa room at the Boca Raton Resort Club. I have had the chance to visit here! Again, a cavernous space that most of us do not have, but look at the materials used- plaster, marble, tiling. And lots of candles! Hints of blue as well- but very calming and serene. I'd think one could install a mosaic like one of the ones shown below over a soaking tub if a window didn't work and it would be fabulous.

Here's to a bit of relaxation amid the holiday hubub!
Posted by Southern Aspirations at 8:02 AM