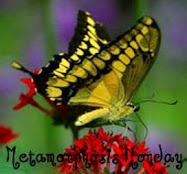 Today, I'm participating in Between Naps on the Porch's Metamorphosis Monday. My pantry- BEFORE. Yep, it was a disaster and I can't believe, to be perfectly honest, that I'm showing it to you. The Pantry Project began shortly after we bought this house... ahhh 3 1/2 years ago (yes, I'm a bit embarrassed). 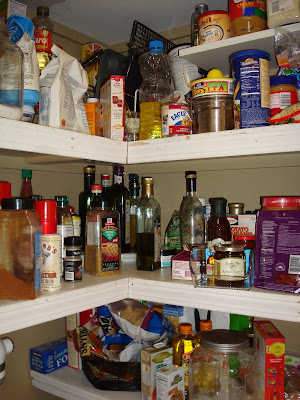 I happily painted the walls a khaki color and Mr. Southern added the left sides of the shelves (when we moved in, only the back shelves were up). We have a nice-sized kitchen, but for 2 adults who lived on their own for roughly 10 years and both love to cook- it just isn't big enough. But here we are. Mr. Southern also added a half shelf- for the spaghetti sauce and noodles he likes to stock up on when they are on sale (I, on the other hand, hate spaghetti especially straight from the jar, but that's another story).
The shelves have some depth to them, which is the good news. The bad news, of course, is getting to the stuff in the back. Had I had unlimited funds, I would have installed sliding shelves everywhere. Instead, I took some ideas from my organization inspiration blog posting a while back and went after uniform containers.
This is in no way perfect, but it's real, and I hope it helps someone!
Starting with the bottom of the pantry. In theory, I like the idea of keeping floors free of items for easy cleaning. In this pantry, I'm making use of every spot. I added seagrass baskets (Target) and organized extra bottles of juice/wine in one and plasticware in another. I'll buy another small milk crate version and stack it so the plasticware isn't overflowing out the top. I'll probably also buy another long short version to stow the crock-pot in. 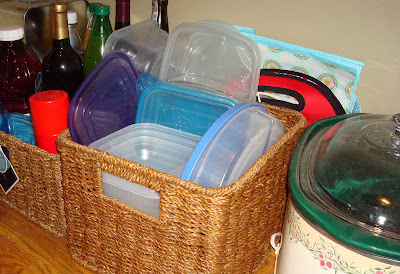 The bottom shelf used to house cereal. Not a good idea when one has a perpetually hungry Golden (Tilghman) who is tall and happy to help himself to whatever he finds if the door is left ajar. I bought two lazy susans (Bamboo, The Container Store) to make use of the deeper space and grouped all oils on one and all vinegars on the second. 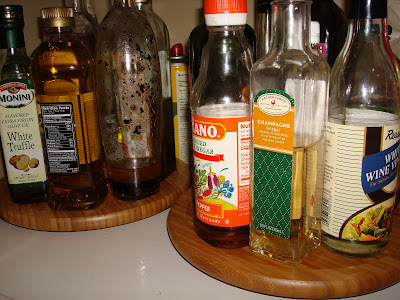 To the far right, I set up a can holder from The Container store. It was a pain to put together (not flimsy exactly, but not the industrial strength I had hoped for) but seems to be holding up. 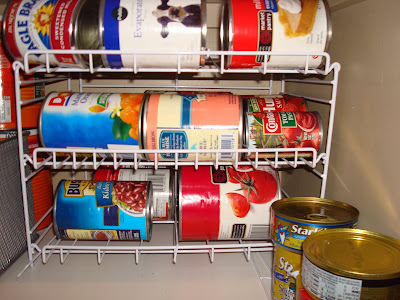 Next shelf- baking supplies. I realized that I wasn't baking as often as I used to in large part because all of my ingredients were difficult to access. In my dream world, I would have found air-tight glass canisters but all the glass ones I found were not airtight. And many of the decorative ones were limited in size and functionality.
I decided on the Oxo Pop-ups (I purchased at The Container Store because I can order online with Upromise, have a portion of the sales go to pay off grad school loans, pick up in-store, AND they're having a 20% off event through August). But, Pop-Ups available all over). Big ones for the sugar (which reminds me, I need to pick up another bag), flour, whole wheat flour, and bread flour. Smaller for confectioners sugar, brown sugar, dark brown sugar, fine sugar, etc. I even boxed up baking powder because it looked so much better in the container than in the open yellow box. Remaining baking ingredients are to the left, either on a lazy susan or in a clear tray for easy access. 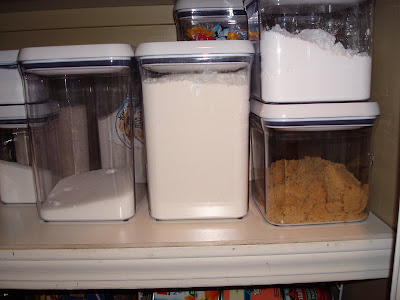 Next shelf is still holding some spices. My plan is to dump many of these and start fresh in clear glass jars and organize in a drawer. In previous dwellings, I arranged all my spices in clear glass jars on ledges hanging on the walls of the kitchen. Sadly, we don't really have any wall space here. I also purchased airtight glass jars for baking-related things like chocolate chips (can be DEADLY TO DOGS), chopped pecans, raisins (DEADLY TO DOGS), and dried cranberries. I bought one French jar (with the orangish/yellow seal) and decided I didn't need to pay the extra dollar so switched to the standard jars. In retrospect, the extra dollar would have been worth it as the French jars are uniformly shaped and thus stack. 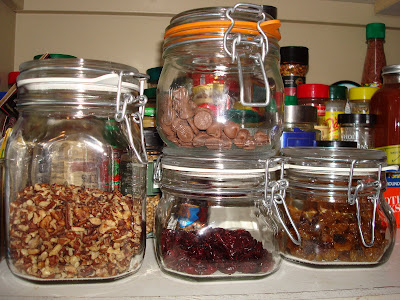 To the right, random assortment of sauces. We have way too many of these. Oops and a stashed Hershey in the back from our camping trip (Smores). 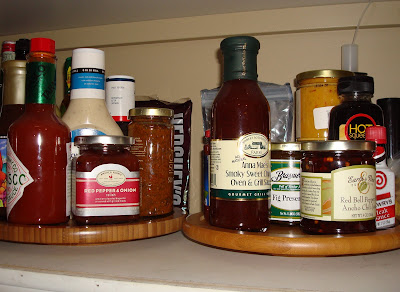 Next shelf is Mr. Southern's Pasta Sauce/Pasta section. See how many boxes of pasta we have!? It's ridiculous! He was sad that my breading/grits/cornmeal/rice overtook his sauce so today he bought four more jars of sauce. :( It fits, my jars aren't just lined up pretty.
I think I'll purchase more rectangular OXO containers and put all the pasta in that. At least it will look better. Black wire basket for boxes of soups/sauce pouches. 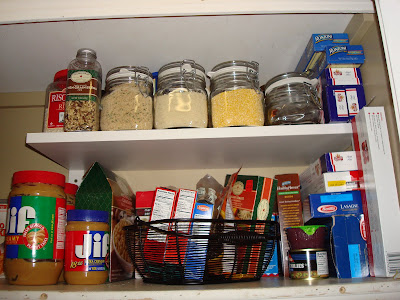 To the left of this section are cookies/crackers (most of them are in the far back corner) and then boxed cereals and other breakfast items (oatmeal, pancake syrup, extra jam, etc).
OK, I realize this was likely an inane amount of detail, but I am so excited to have gotten to this point! It's certainly not gorgeous, but it's MUCH better than it was. We also have a rolling cart to the left of the entry, which houses most of our appliances to keep the counters (ideally) clear. 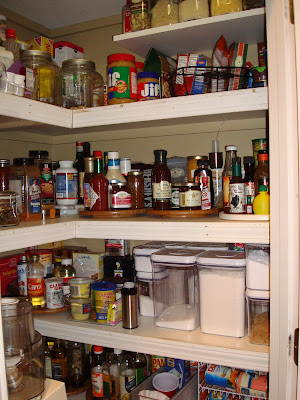 Here's to an organized day!
--Emmie
Posted by Southern Aspirations at 7:56 PM