One of These Things Is Not Like The Others...

In honor of Sesame Street's 40th anniversary.... (UPDATE: and adding salt to the wound following the announcement that Metropolitan Home is shuttering) 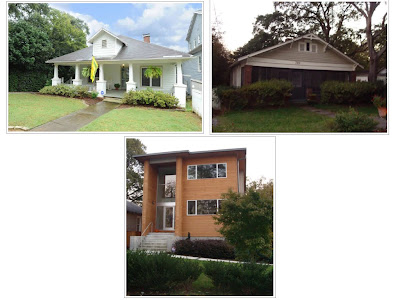 I recently was driving through the neighborhood of Berkeley Park, a little neighborhood in the Northwest section of Atlanta. The neighborhood has a rich history- starting in 1921 (though probably earlier). The area has undergone a revitalization of late, assisted largely by the active neighborhood association.
Back to Sesame Street. On my drive through the other day, I couldn't help but think of the old Sesame Street game, One of These Things is Not Like the Others after passing one of the houses above. Can you guess which one!?
In my review of Candler Park, the last photo created a little stir-- do these modern-type dwellings "belong" in this older, established neighborhoods? As you've read in several other Atlanta blogs, there are many tear-down/rebuild projects here- like many other older cities in the US. In some cases, older bungalow homes are torn down to make way for "McMansion" type properties, like the property above (yes, it is a replica of the White House, built in the Druid Hills neighborhood of Atlanta).
In a few cases, houses are torn down and very modern-style dwellings are erected.

via Atlanta Homes Magazine
While this situation is quite different than the McMansion wave, I wonder about the "fit" of this house in a neighborhood.

A recent real estate listing exemplifies my question-- "This Contemporary Mid Century Modern 2-Story Home is like no other in the neighborhood."

Hmm. Is that a good thing?
Inserting modern architecture is certainly not a new phenomenon to Atlanta. A drive through the largely traditional Buckhead area and you'll find numerous modern homes built in the mid-Century modern style.

I looked through several "modern home" listings to find examples that I thought combined modern with the traditional. I find the combination quite fascinating, though I fear they may fall towards the McMansion end of the spectrum.
Take a look- I admit, I love just about everything in this next house.

Here's one that you might just pass by and think nothing of it.

Surprise! Here's the back with a very modern addition.

Here's another bungalow with modern touches (and I'm guessing a second floor addition).

So what do you think? A different house for each different type of owner or eyesore?
While I do appreciate modern architecture, I must admit I'm a bit old-school with some of these traditional bungalow neighborhoods. That said, I also must mention that in my humble opinion, the modern building I showed first is not the eyesore of the neighborhood... 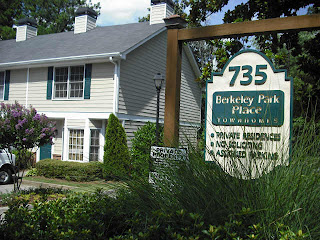 I'd vote for the townhouses built in 1998.
I'll leave you with a few other Berkeley Park homes... just because I happen to love this cute little neighborhood! (OK, no offense to seller, but I think this one could use a little enhancement in the front... but look at the cute space inside and in the backyard!) Homes sourced largely from sellmodern.com. For more info on Modern style in Atlanta, check out Modern-Atlanta.
Posted by Southern Aspirations at 8:42 AM