Look How Far We've Come (in the backyard)

While I totally support the idea of being happy with what you have, I find myself often looking for the next thing. You see a healthy chunk of that in this blog! So, though I'm tempted to feel anxst regarding the mounting to-do lists of our various yard projects, I thought I'd take a moment to celebrate the wins... I mean- look at where we were just last year! 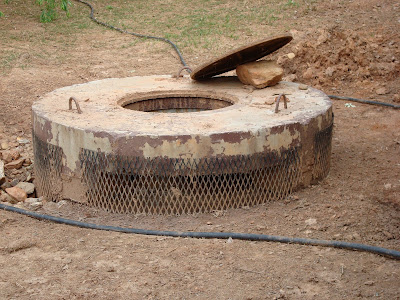 This monstrostity is also known as "the thing." Essentially, it's a cistern or something that collects all the runoff water from our yard and our surrounding neighbors and dumps it into the city's drain. If we were smarter, we would have built a rain barrel inside with some sort of pumping action so that we could still water our yard during the drought. Live and learn.

When we moved into the house, the previous owners had planted a ring of privet around the thing (see unidentifiable mass in the below picture on the right). 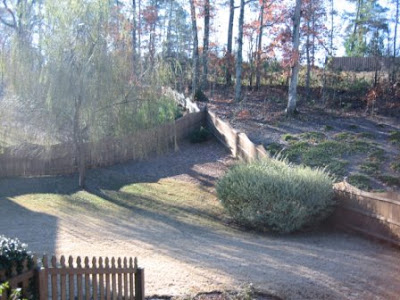 When I first saw the yard, all I could say was, what is that thing and why have they planted it? Please note that the fence is 6 feet tall, so this privet looked ridiculous.

Back to the thing. Mr. Southern Aspirations called the city who installed this water retention system for assistance. The gifted city engineers were going to fix the problem by pouring concrete around the thing. Because that would look pretty. Fortunately, Mr. Southern, also an engineer, literally climbed down inside the thing (it's like 10 feet deep!) and figured out that we could remove one of the concrete rings and make the thing level with the ground. Genius! This is why I married Mr. Southern.

Next problem- the small dip/river that spanned the width of the backyard. The picture of the backyard above was from the previous homeowners who didn't have large dogs. Once we got the house, just imagine the sort-of grassy area replaced with a span of clay dirt when it's dry out and a mud pit after it's been raining. Then picture three crazy dogs romping through the mud in the rain and then wanting to come inside and snuggle and you'll see why this project belonged at the top of outdoor project priority list. 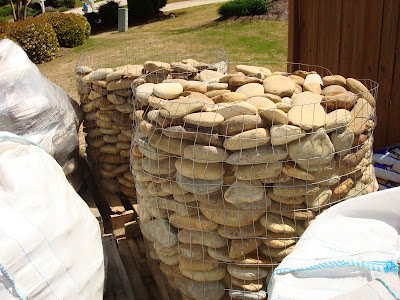 To combat the muddy river situation and add some interest to the backyard, we decided to build a dry creek bed and bought tons of rocks...literally. Above you can see our beautiful river stones that cost way more than I ever thought rocks could cost. 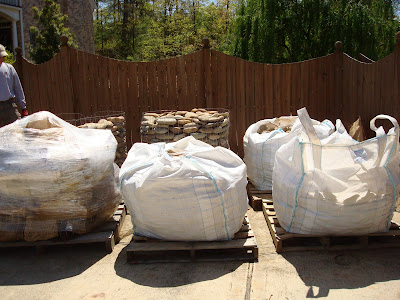 Another picture of the rocks just so you can see how many we really had to move. Actually, it was more than that as we expanded the bed and had to order even more. 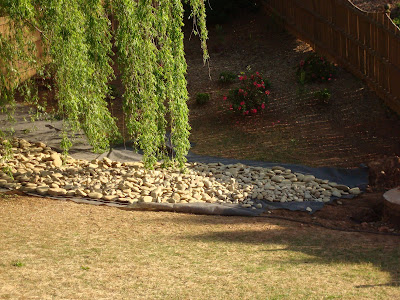 Here we are halfway through the project. You can see the river bed taking shape and the thing (on the right) still stick out of the ground on the right. I believe this was when we were negotiating for "no concrete." Note that we put down landscape fabric first, which I highly recommend, as it has nearly eliminated any chance of weeds or grass from sprouting up. 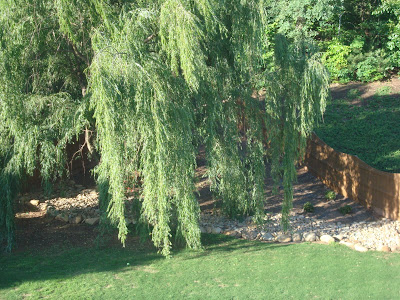 Ahhh. And here we are today. You can see the dry creek bed just past the Weeping Willow tree. Hidden from view are all the azaleas we planted on the other side of the river bed. Makes for a great springtime color display. 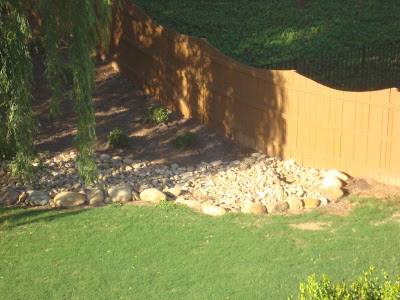 This picture is a close-up of where the thing was! With one of the concrete rings removed, it is completely hidden from view. I still need to work on some artful placement of larger boulders and plant some stuff in the dirt spot to the front of the rocks, but SO MUCH better than it used to be! And the backyard looks considerably bigger.

Now, back to stressing about the plants that need to somehow get planted under the Weeping Willow....

--Emmie
Posted by Southern Aspirations at 7:35 AM