Floating Down the River... in a House

Welcome Back! Hope y'all had a fabulous weekend.  I got in some great girl-time Friday and Saturday and then Mr. Southern and I attended a golf tournament to benefit The Leukemia and Lymphoma Society on Sunday.  And I am NOT a golfer.  But I made a few decent shots that we actually used!
During the outing, one of my friends mentioned an event she attended earlier in the weekend- a party on a houseboat.  Oh, the houseboat. 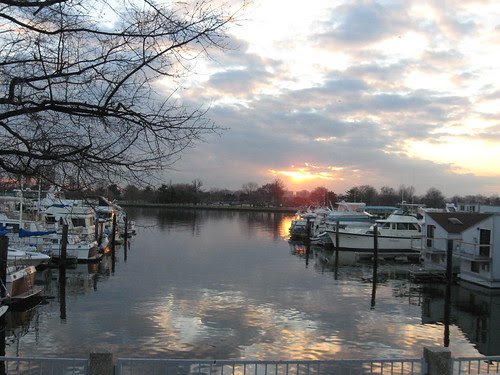 Gangplank Marina Washington, DC via Flikr
When I lived outside of Washington, DC, I snagged invitations to several parties floating on the Waterfront.  Though I struggled somewhat with the fact that the house was moving- exacerbated by our imbibing - few things are cooler than a party on a houseboat.
There are several houseboat neighborhoods across the country-way more than I ever could have imagined- and several much more famous than DC.

via MetroShip
Many of these locations also feature "floating homes," which differ from houseboats in that they are not self-propelled.  The history of Houseboat across the US varies by location, but reports suggest it dates back to at least the 1880s.  In Washington, DC, the houseboat community grew due to the shortage of homes during World War II.  Nearly every houseboat community, in the US at least, has been embroiled in political battles- regarding property taxes, water usage, ownership challenges, etc.
Eastlake in Seattle photo via Boating SF
This is also not a US-phenomenon- I found houseboat listings in the UK,  Canada, Australia, Netherlands, etc.
Morgan Waterfront Marina (Australia)

via Holiday Lettings
What do you think?  Could you adopt the Houseboat lifestyle?  Perhaps for a vacation?
--Emmie
Posted by Southern Aspirations at 6:41 AM