Manuscript for a Southern Garden

I hope y'all had a great weekend! Mr. Southern and I spent some quality time doing yard work- the tilling in the back yard is almost complete!  I have a new enemy in the garden- the squash borer, which has decimated all of my squash and zucchini.
As I mentioned, I am participating in the Summer Reading Challenge and recently finished Eudora Welty's Delta Wedding.  Near the end of the book are some fabulous description of Ellen's garden in the Mississippi Delta- I hope you enjoy reading this as section as much as I did! (Background- Ellen is pregnant with her 9th- I think- child, goes out with her gardner Howard, a few days after daughter Dabney's wedding.  Others mentioned- Bluet, her youngest daughter, Battle, her husband, and Tempe, her sister-in-law).

via Flikr Trout Fishing in America
Ellen in the morning cool walked in the yard in her old dress, her scissors on a ribbon around her neck, and one of the children's school gloves on in case she wanted to poke around or pull mulch.
She reached down and pulled up, light as down, a great scraggly petunia bush turned white every inch.  In those few days, when she had forgotten to ask a soul to water things, how everything had given up, or hung its head.  And that little old vine, that always wanted to take everything, had taken everything- she pulled at a long thread of it and unwound it from the pomegranate tree. 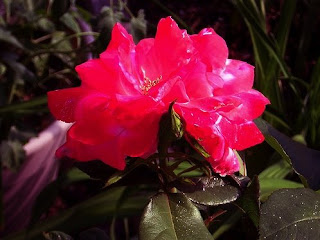 via Flikr- blackwellsr
The camellia bushes had all set their buds, choosing the driest and busiest time, and if they did not get water they would surely drop them, temperamental as they were.  The grass all silver now showed its white roots underfoot, and was laced with ant beds up and down and across. And in just those few days, she must warn Battle, some caterpillar nets had appeared on the pecan trees down in the grove- he would have to get those burnt out or they would take his trees.  Toward the gate the little dogwoods she had had brought in out of the woods or saved, hung every heart-shaped leaf, she knew the litter turrety buds were going brown, but they were beyond help that far from the house, they would have to get along the best they could waiting for the rain; that was something she had learned. 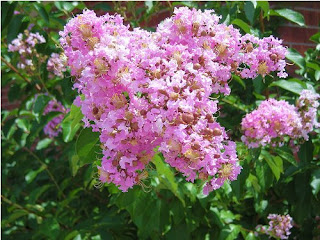 via Flikr- blackwellsr
A bumblebee with dragging polleny legs went smothering over the abelia bells, making a snoring sound.  The old crape myrtle with its tiny late old bloom right at the top of the tree was already beginning to shed all its bark, its branches glowed silver-brown and amber, brighter than its green.  Well, the cypresses in the bayou were touched with flame in their leaves, early to meet fall as they were early to meet spring and with the same wild color.  The locust shells clung to the tree trunks, the birds were flying over every day now...

via Big Easy Tours
And there was that same wonderful butterfly, yellow with black markings, that she had seen here yesterday.  It was spending its whole life on this one abelia. 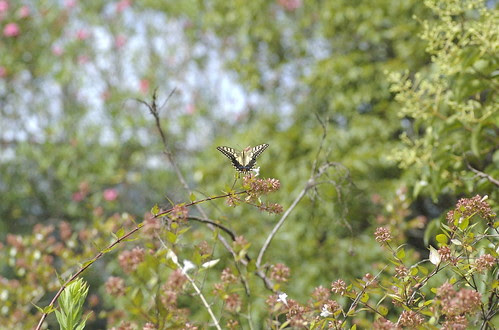 via Flikr Kaycatt
The elaeagnus had overnight, it seemed, put out shoots as long as a man.  "Howard, bring your shears, too!  Did this look this way for the wedding? It's a wonder Tempe didn't get after us for that."
She needed to take up some things that would go in the pit for winter, she wanted to flower some bulbs too.  When, when?  And the spider lilies were taking everything.

via Southern Bulbs
Her chrysanthemums looked silver and ragged, their few flowers tarnished and all their lower leaves hanging down black, like scraggly pullets, and Howard would have to tie them up again too..... The dead iris foliage curled and floated wraith-like over everything.  "Howard, you get the dead leaves away from here and be careful, if I let you put your hands any further in than the violets..."

via Bois-Darc
She looked at the tall grass in her beds, as if it knew she could no longer bend over and reach it. What would happen to everything if she were not here to watch it, she thought, not for the first time when a child was coming.  Of all the things she would leave undone, she hated leaving the garden untended- sometimes as much as leaving Bluet, or Battle.

Wister Gardens
"Now those dahlias can just come up out of there," she said, pausing again.  "They have no reason for being in there at all, that I can see..."  She wanted to separate the bulbs again too, and spread the roman hyacinths out a little under the trees-they grew so thick now they could hardly bloom last spring.... 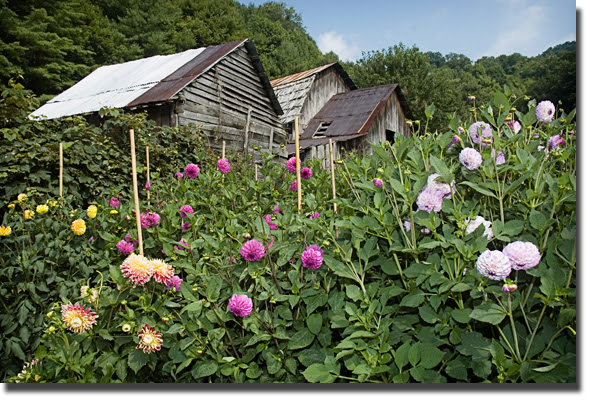 via Blue Ridge Blog
"Howard, look at my roses!  Oh, what all you'll have to do to them."
"I wish there wasn't no such thing as roses," said Howard.  "If I had my way, wouldn't be a rose in de world.  Catch your shirt and stick you and prick you and grab you.  Got thorns."

via Trudy at Garden Guides
"Why, Howard.  You hush!" Ellen looked back over her shoulder at him for a minute, indignant.  "You don't want any roses in the world?"
"Wish dey was out of de world, Miss Ellen," said Howard persistently.
"Well, just hush, then."
She cut the few flowers, Etoiles and Lady Hillingtons (to her astonishment she was trembling at Howard's absurd, meek statement, as at some impudence), and called the children to run take them in the house.  ...
Time, that she had wanted to stand still in the garden, waiting for her to catch up, if only it would fly and bring Dabney home.
Posted by Southern Aspirations at 7:23 AM